Physics and Mathematics of Calabi-Yau Manifolds

Physics and Mathematics of Calabi-Yau Manifolds 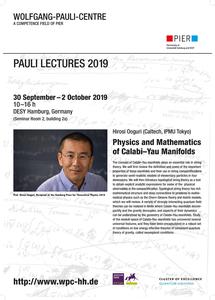 The concept of Calabi-Yau manifolds plays an essential role in string theory. We will first review the definition and some of the important properties of these manifolds and their use in string compactification to generate semi-realistic models of elemental particles in four dimensions. We will then introduce topological string theory as a tool to obtain explicit analytic expressions for some of the physical observables in the compactificaiton.

Topological string theory has rich mathematical structure and deep connections to problems in mathematical physics such as the Chern-Simons theory and matric models, which we will review. A variety of strongly interacting quantum field theories can be realized in limits where Calabi-Yau manifolds decomactify and the gravity decouples, and aspects of their dynamics can be understood by the geometry of Calabi-Yau manifolds.

Study of the moduli space of Calabi-Yau manifolds has uncovered several universal features, and they have been encapsulated in a robust set of conditions on low energy effective theories of consistent quantum theory of gravity, called swampland conditions.